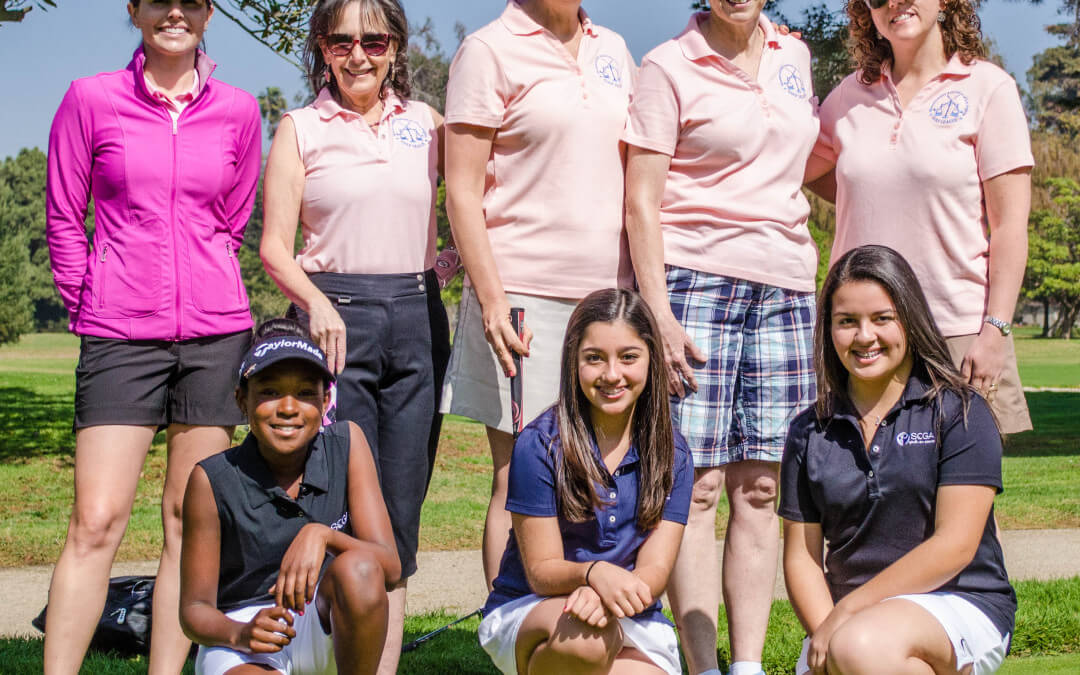 It happened because of Sandra Day O’Connor. The Former Associate Justice of the Supreme Court of the United
States spoke to a room full of female professionals at an event a few years back, and Cynthia Cohen was struck with an idea. She was actively involved with the Women’s Lawyers Association of Los Angeles (WLALA), which provided a multitude of opportunities and support systems for up-and-coming lawyers and young professionals, but what about
those more advanced in their careers? It seemed to Cohen that programming became less and less as women worked their way through the ranks. “Women with established careers still need a support system,” Cohen says. “They still need networking opportunities and a place to share their experiences. I realized we didn’t have specific programming for our seasoned veterans.” She didn’t know it at the time, but the answer lay with golf and the SCGA. After talking with Ruth Kahn, the then-president of the WLALA, the two began putting together new programming. Included was
a one-day golf clinic and seminar, in which 30 women — many with little to no golf experience— participated. The group had SCGA Junior join the event’s speakers’ panel, where they discussed the importance of golf in professional life and stressed how important it is to involve kids with the game at a young age. The event was a hit. The women loved it, making it clear that golf programming was a must on the WLALA event schedule. “Golf is a great equalizer,” Kahn
says. “You can play with a mix of ages and skill sets. It’s hard to find that in other activities.” Cohen got started right away, forming a golf league as well as an SCGA golf club. The endeavors have now attracted more than 75 women
from the WLALA chapter, and the spring/summer league schedule includes 15 events across the Southern California area, including two SCGA Member Outings. But the women weren’t done. After including SCGA Junior in their original clinic, the group was struck by the work the organization does for junior golfers, and especially young girls. WLALA reached out and asked if there was any way they could support those efforts. “It’s always amazing when an SCGA club reaches out in hopes of supporting our program,” says Jennifer Alban, director of programming for SCGA Junior. “There are so many ways for clubs to get involved with what we’re doing, it’s just finding the best match for that specific group.” For WLALA, the natural fit was career mentoring for young girls. SCGA Junior hosts a variety of educational outings throughout the year, so adding an event with a group of female lawyers to the schedule was an added benefit. The WLALA golf group hosted 15 juniors for a day of golf and mentoring, which featured a speaker’s panel and one-on-one time. “Within our group, there is such a variety of professions, even though they all fit into the category of law,” Kahn says. “For some girls, law school isn’t the right path, but there are women in our group who didn’t take that route and have gone on to successful careers as court reporters. We were able to match a lot of women with like- minded juniors.” The women hosted the juniors for golf, in addition to raising funds for SCGA Junior’s girls committee, which
provides specific programming for female junior golfers. “The mentoring values held by SCGA Junior aligned perfectly with those of WLALA,” Kahn says. “It’s just been a great fit and we look forward to doing more with such a great group of young girls.” – Julia Pine (Originally seen in FORE Spring 2014)